A privacy officer, a professor, and a patent attorney walk into a room . . . 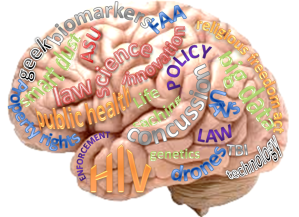 There is a whole lot of brain power, collaboration, and excitement.

And trust me, you have not seen excitement until you see those listed above along with about thirty of their colleagues gather in one place to discuss fascinating topics.

Last week, I had the honor to attend the first Law, Science, and Innovation Center of the Sandra Day O’Connor College of Law Community Board meeting. This is a school and a center to which my heart belongs. Along with professors of both the College of Law and ASU in general, there were alumni (some of my favorite people, such as May Mowzoon, a patent attorney), elite staff (such as Deb Pogson, the managing editor for Jurimetrics), and many community affiliates from small companies and large ones. In fact, I met a gentleman with whom I will soon be speaking on a panel with at the State Bar of Arizona’s 2015 convention – “The Perils of Connectivity – Privacy and Security on the Internet of Things.”

The format of the community board is geared to make the board more substantive rather than an operational board for the center. To this end, the center presented four topics and then we broke up into working sessions for each topic – we could each choose two working groups for thirty minutes each.

The two topics I was not able to make it to were:

Airspace in the Age of Drones by Prof. Troy Rule – which was not about military drones (unmanned aerial vehicles: UAVs), but more about personal use drones. The elements he brought into question were wonderful. He posed three issues:

As the opening topics, loved the collegial competitiveness, he dared Prof. Hodge to follow that.

Public Health Law: HIV and the Religious Freedom Restoration Act in Indiana by Prof. James Hodge. Okay. wow. Two controversial topics. There is a lot of information out there about the RFA, but not a whole lot about how it may impact huge public health concerns. A rural area in Indiana saw more than 100 diagnosed with HIV – unprecedented.

One way that has been proven to control the spread of HIV is a needle-exchange program, which has opponents. Most opponents do so on religious grounds. How do these two controversial topics play together? What are the impacts to public health? Fascinating intersection of two seemingly unrelated topics that may well have big repercussions.

Now, the two that I did participate in the working groups:

Biomarkers for Concussion Susceptibility and Effects by Prof. Betsy Grey. This topic was about concussions, chronic traumatic encephalopathy (CTE), and biomarkers. The presence of traumatic brain injury seems prevalent in professional/college football, but football injuries account for a small percentage of events. Yet the news is sensational given recent actions by linebacker Chris Borland of the San Francisco 49ers and the University of Michigan offensive lineman Jack Miller.

The issues are numerous (and more details can be found here) – can biomarkers predict those vulnerable to CTE or are the biomarkers only slightly helpful and then only after repetitive injuries? Would there be an effect on waivers, disclosures, insurance, etc. if biomarkers were accurate? Is the root cause more to do with protection or false security in protection, such as helmets? Apparently, real football players and rugby players think we Americans are simply wimps. Yet, the over-reliance of inadequate protective gear can and does lead to worse injuries. The rules for rugby hits are much stricter than our football rules.

There is hope that a concussion could be diagnosed on the field with saliva.  Another route is to enhance the return-to-play laws in every state. Yet another route is to look at health professionals in/on/around the field, such as athletic trainers. As a former RN, this topic fascinated me. I have also done quite a bit of research into certified athletic trainers, so I know it is a growing field. As for biomaarkers…just because they are present, does not mean they are beneficial – is the company backing the research simply creating a false solution for a problem that is way beyond biomarkers?

Big Data by Prof. Gary Marchant. Now this is a topic that is popular pretty much everywhere and one that I live and breathe on a daily basis. To paraphrase one of my favorite poems:

Big data is the phenomenon with the massive accumulation of data on everyone. Prof. Marchant presented information from IBM that there are four characteristics of big data: volume, velocity, variety, and veracity. Love that synopsis. Many years ago, in law school, I started a paper on the impacts of location based services on cell phones. I never actually finished the paper (and have since apologized profusely to my professors, one of whom was Prof. Marchant). My research was at the very early stages and somehow, I should have known I would wind up in privacy. Technology simply fascinates me – and what technology means to data and further, to privacy simply gets my motor running.

Three aspects in his presentation really captured my attention: smart dust, life caching, and genetic surveillance. Here’s the issue I see – the technologies are built by people who develop technology: geeks. Then other people take this technology to use it to capture data in ways probably never imagined: business and marketing people. If it was imagined, many geeks don’t care about laws (sorry, married to a geek – am a privacy geek – it’s not an insult, just a state of being). The ability to capture data is sexy. The ways to use that data is sexy. The ways to match that data across machines and time is terrifying yet still sexy. Like a killer seductress. Data Succubi.

It was a great community board meeting. The attendees were enthralled by the idea of engaging in substantive work. It is a good move by the center to capture the interest of the community and alumni. I truly look forward to being more involved.

Broad Topics I write about