This was the speech – nearly verbatim – from my 2008 Phoenix FBI Citizens Academy. I am positive that a few words were changed in the delivery. Janet Napolitano, Arizona’s then governor was the “professional” speaker. I was the highly honored elected student speaker. 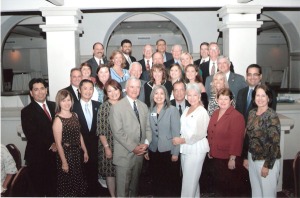 the Phoenix FBICA class of 2008

When we were told that I had been elected the class speaker, I was deeply honored and deeply troubled – there was some talk about using the redneck as target practice.  I must remind you that I am a business invitee of a commercial venture participating in the specific activity for which I was invited…in other words, I expect FBI agents to throw themselves in the line of fire.  Heck, someone could be on a hill a mile away with a 50 caliber.  I guess I’d better speak quick.

I am honored and I must say a few thanks. Scott is one of the few people I tried to talk into going to law school – and who has done an amazing job in the two years since.  Connie, thank you for your support and encouragement that helped get me accepted.

I am a member of an incredible citizens academy class, we have made history this year. This is the 100th year for the FBI, and we have the first foreign citizen in the classes – and a Canadian consul no less.

About 15 years ago, the counterintelligence team was sitting around a table complaining about the lack of resources to maintain surveillance on their top 40 people.  So they decided to get them all together at the same place at the same time – every week.  It was so successful; they have done it every year since.  Welcome to the Citizen’s academy – and its alumni association!

I think it was the fourth class when we were listening to the guest from the US Atty office.  SAC John Lewis came in and made an announcement.

“Ladies and gentlemen.  Do you recall when we explained that there are times when our suspicions of a person rise to the point that we can get a warrant.  Sometimes these are a sneak and peek  – we have to get in quickly while they are gone and see what is there.  Other times, we have enough reason to be able to take their computers or something with us.  Well, today, we have an unexpected occurrence.”

No, we’re safe – for now.  It was the DC guy who comes to ensure they follow all protocols and procedures for collecting and handling the evidence.  It was an unplanned visit and so we had an unexpected treat.

The whole program is like that.  We learn so much that many of us never imagined.  But that’s the purpose.

You – the FBI – stand on a wall.  You stand on a wall we don’t even see.  And whether your weapon is a semiautomatic, a keyboard, or a credit card to pay for lunch for a Mexican official – you use that weapon with precision and effectiveness.

We’ve learned so much.

We learned that Hostage negotiators don’t lie. And that polygraphs are a scientific tool that could test that for us.

We learned no one is safe online.  No one.

We learned that there are some agents here who have never kissed a girl – but they can quote star trek episode 138.

We learned that military recruiters cheating on tests are never simple cases or cheap to solve.   Seven steps from the ASVAB to airplanes and border incursions.

And we learned that sharphooters do NOT use red laser sights.  How could they possibly tell which one is theirs?

These agents have hearts of gold, nerves of steel, and a dead-on aim.  I would have no problem sitting in a chair when the SWAT team takes a building.

And what can we do with our newfound knowledge?

So what do we take away from this unforgettable experience – How are we changed?

I don’t sing, but this is so fitting.  See if you can pick up the tune.

Bye Bye. To the FBI.
We shot our shotguns at the levies and the levies were dry.
So to the agents and staff of the FBI
We say thank you for the day we don’t die.

Broad Topics I write about